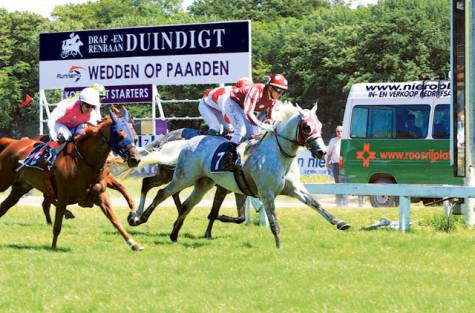 The Hague David Bould rode Raihan to an exciting victory in the Group 3 Shaikh Zayed Bin Sultan Al Nahyan Cup at Duindigt racecourse in The Netherlands on Sunday.

The meeting also featured the Wathba Stud Farm Cup VI which was won by Ijad, owned by Shaikh Mansour Bin Zayed Al Nahyan, Deputy Prime Minister and Minister of Presidential Affairs. The winner was brilliantly ridden by Charles Nora to register his maiden win.
Ijad was followed by Shrek OA and Shakia Dormala in second and third places, respectively.

Al Hammadi said: “We thank Shaikh Mansour Bin Zayed Al Nahyan, Deputy Prime Minister and Minister of Presidential Affairs, for staging these races in The Netherlands. There is a large presence of Purebred Arabian horses in the country and this move will help boost Arabian racing both in this part of the world as well as in Europe.”

“It is encouraging to see high quality Arabian race horses are competing here and many people are showing interest in knowing more about the UAE as a result of the success of the Festival and it is a very good development,” said the diplomat.

Sawaya said the number of races in the HH Shaikha Fatima Bint Mubarak World Ladies Championship has been increased to 12 from 10 with San Francisco hosting its debut race in 2013. The race series will return to Duindigt where it made its debut in 2011.