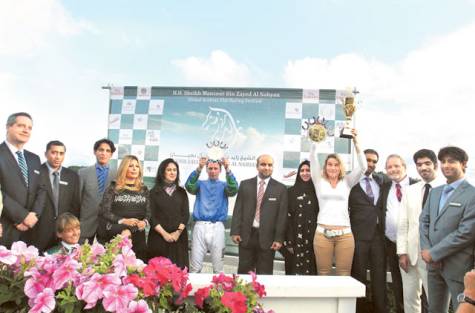 Athlete del Sol had finished second in the Shaikha Fatima Cup in Duindigt last year but in Tuesday’s race, under Fredrik Johansson, the van den Bos-trained horse came up with a fine finish to beat Al Dahis, the 2010 winner here.

Rasikh, owned by Shaikh Mansour Bin Zayed Al Nahyan, Deputy Prime Minister and Minister of Presidential Affairs, was one of the favourites and did all the running but both Athlete del Sol and Al Dahis did well to finish 1-2 in the feature race.
Van den Bos said: “It is a great feeling, of course, to do a long travel and winning two races. It was a tough competition as the Shaikh Zayed Bin Sultan Al Nahyan (Listed) Cup drew really good horses, including favourite Rasikh.”

“We are very happy to host the Shaikh Mansour Bin Zayed Al Nahyan Global Arabian Flat Racing Festival’s races for a second year in a row here and this has put the Emirates in a commanding position in Sweden’s racing circle. With Shaikh Mansour’s support, Purebred Arabian horse racing have revived in this part of the world,” said Shaikha Najla.

She also praised Shaikh Mansour for his initiative in setting up the stage to host the Shaikha Fatima Bint Mubarak EARS (European Association of Racing Schools) Conference on Education and Training in 2013, in Abu Dhabi.