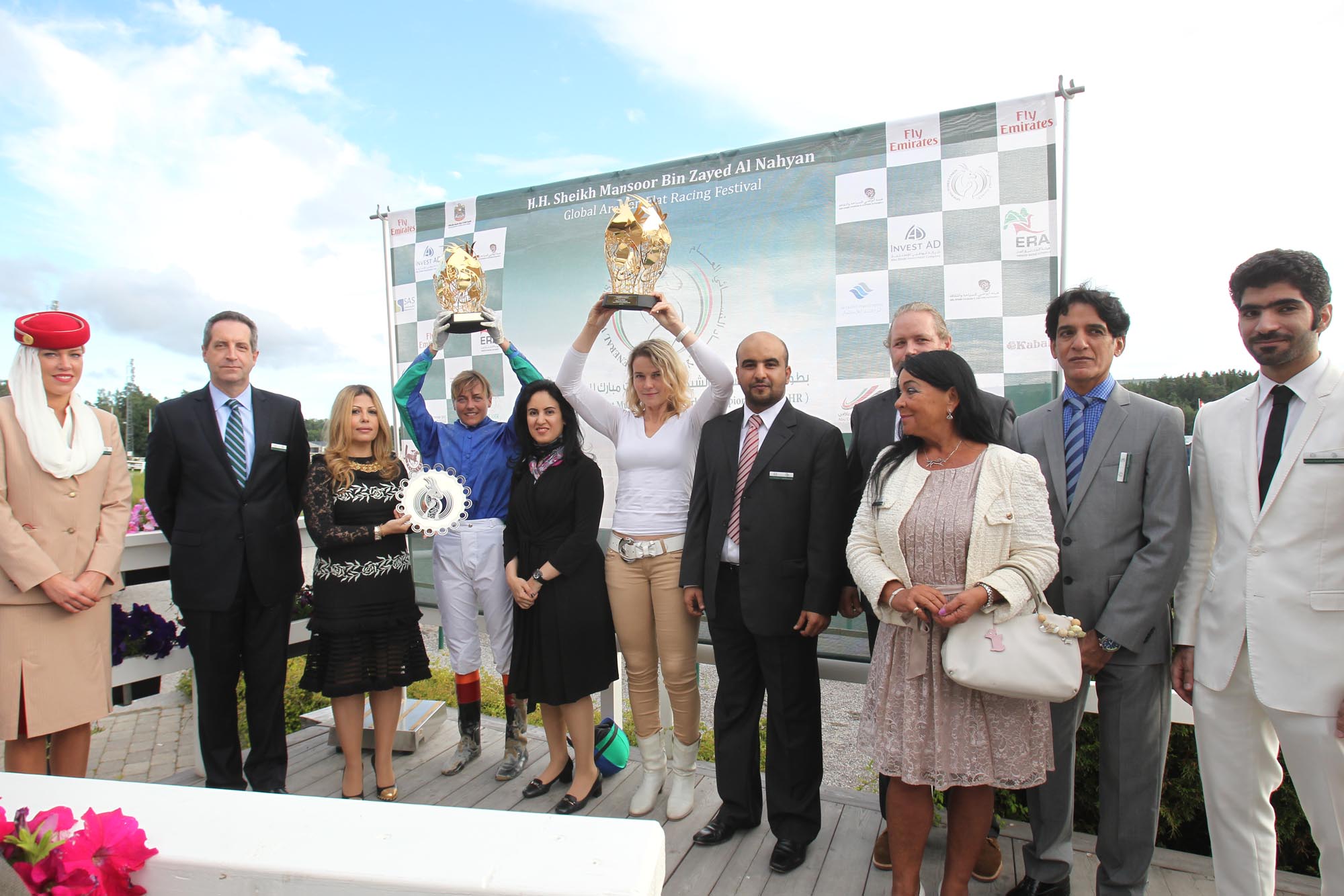 The day also witnessed UAE’s Shathra Al Hajjaj stealing the show with a creditable second on Sakbain the Sheikha Fatima Bint Mubarak Ladies Championship (IFAHR) race.Al Hajjaj got a good start and seemed to be heading for her maidenwin until she was over taken by France’s Delphine Garcia-Dubois towards the end of the 1.200 metre race.

Her second place comes after a close third in the same race series in Berlin, last month.

“I got a good start and looked like a winner but Sakba slowed down in the concluding stages of the race and was beaten to second placeby half-a-length,” said Al Hajjaj adding that she needs to improve further to achive good results.

“We are very happy to hostHH Sheikh Mansoor Bin Zayed Al Nahyan Global Arabian Flat Racing Festival’s races for a second year in a row here and this has put the Emirates in a commanding position in Sweden’sracing circle. With HH Sheikh Mansoor Bin Zayed Al Nahyan, Deputy Prime Minister and Minister of Presidential Affair’s support, Purebred Arabian horse racing have revived in this part of the world, “said Al Qassimi. She also praised Sheikh Mansoor for his initia tive in setting up the stage to host theSheikha Fatima Bint Mubarak EARS (European Association of Racing Schools) Conference on Education and Training in 2013, in Abu Dhabi.

Abdullah Al Qubaisi said:We thank HH Sheikha Fatima Bint Mubarak, chairperson of the UAE General Women’s Unionfor really giving a chancefor women everywhere to have a race for themand especially for the UAE girl where she can compete and show that how tough she is and the proof is what Shathra has done today by finishing in second place. She lost only after a big fight she gave. It is very very important. We are also very happy with the new initiative (Sheikha Fatima Bint Mubarak EARS Conference on Education and Training)that has been launched on Mondaywhich is really very important for us and the Middle East and theworld.

Ms Lara Sawaya s aid:” We are proud of Shattra who came in with a fantastic performance. She is really a talented girl. She will be attending a leading European Association of Racing School in order to gain racing style and riding skills.”

“The HH Sheikh Mansoor Bin Zayed Al Nahyan Global Arabian Horse Racing Festival is going to great lengths to promote the Arabian horse racing across the world. It is very exciting to see the fans cheering the young ladies today, “she added.

Stephen Bowey said: “It is exciting to see the continued expansion ofHH Sheikh Mansoor Bin Zayed Al Nahyan Global Arabian Flat Racing Festival and the large number of races now being held in all the corners of the world. It is a tribute to the vision of Sheikh Mansoor Bin Zayed that he continues to promote high quality Arabian flat racing events.”

Karinvan den Bos said “It is a great feeling. Of course to do a long travel and winning two races. It was a tough competition as Sheikh Zayed Bin Sultan Al Nahyan (Listed) Cup drew really good horses including favourite Rasikh.

Rasikh initially did all the running only to be beaten to third place by Athlete Del Sol and Al Dahis.

The National: Capital to hold global meet for stable owners