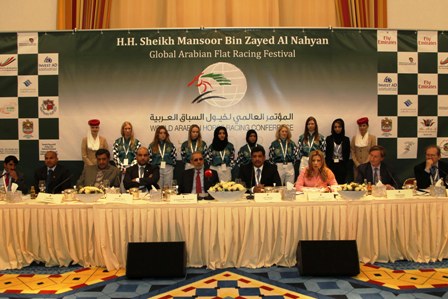 Press release– Stage is set for the 3rd edition of the World Arabian Horse Racing Conference Germany 2012 scheduled at the Ritz Carlton Hotel here from June 7 to 9, it was confirmed on Wednesday.

“We are honored to host this international gathering which aims at promoting the Arabian horse, this noble creature that represents our culture, heritage, history and identity,” said the UAE ambassador to Federal Republic of Germany Mohammed Ahmed Al Mahmoud at the UAE embassy in Berlin.

The initiative which was broke by late Sheikh Zayed Bin Sultan Al Nahyan was a dream that came true thanks to the vision of HH Sheikh Mansoor Bin Zayed Al Nahyan, UAE Deputy Prime Minister and Minister of Presidential Affairs,” he told newsmen.

“The brilliant idea to support and encourage Arabian horse breeders and owners within the UAE and worldwide has always been the driving force behind the progress which has been achieved.

“Berlin, for example, is the capital of politics, culture, economy, heritage and even sports. And with this initiative, our bilateral relationships with Germany will be enhanced at all levels,” he added.

Lara Sawaya, director of the HH Sheikh Mansoor Bin Zayed Al Nahyan Global Arabian Flat Racing Festival and head of the Women Races at IFAHR elaborated: “We have come here to share opinions. Everything and each single topic is open for discussion with the utmost degree of transparency and clearness. The conference has grown bigger enough and the numbers of guests and speakers have increased from 70 in the first edition in Abu Dhabi to 110 in The Hague in the second one. Right now, there are 160 guests and speakers in the current edition.

“Under the directives of HH Sheikha Fatima Bint Mubarak, Mother of the UAE and Mother of the Nation, and the vision of HH Sheikh Mansoor Bin Zayed Al Nahyan, we are revamping all resources to support the women racing around the globe and the clubs which encourage them by providing all assistance and support which they need to show their talent in the sport.

“The jockeys are invited this time to make their point. People talk about the horse but they have never touched the problems and requirements of the man or woman onboard. UAE top jockey Ahmed Ajtebi along with other jockeys will make this point in a special chapter which has been added to the programme.

“All the equine community comes under one roof. The breeders, owners, trainers, jockeys, experts, veterinaries, horse lovers and racing fans will be availed the opportunity to meet together and talk to each other in a healthy and wide open atmosphere.”

Meanwhile, Sawaya thanked the UAE ambassador to Sweden Shaikha Najla Al Qassimi who travelled all the way to address the audience during the conference.

“We normally invite 12 jockeys, but this time we were left with only ten horses in the sixth leg of the HH Shaikha Fatima bint Mubarak Ladies World Championship series. Fortunately, the situation was saved by the Swedish and two horses have been shipped to Germany. We are grateful for the effort.”

Sami Al Boueinen, chairman of IFAHR hailed the initiative of Sheikh Mansoor Bin Zayed Al Nahyan and thanked him on behalf of his organisation saying that the Fegentri races are making good ground and the support of the festival has made things easier for them all.

“We don’t interfere with the races because the Fegentri have their own systems, but our job is to support the Arabian horse and for this reason we help them,” he said.

Abdulla Al Qubaisi, director of the Communications at the Abu Dhabi Tourism and Culture Authority said: “We would like to thank HH Sheikh Mansoor for his initiative which made it possible for us to promote the Arabian horse which is part of our culture, traditions and identity.”

Paul Daverio, president of the German Arabian Horse Society (DRIV) and Gerhard Schaningh, owner of the Hoppegarten Racecourse welcomed the move and reiterated that the conference is going to be fascinating and the most successful of its kind.

Athlete Del Sol bids for another Wathba Stud Farm Cup win in Duindigt on Sunday, May 22