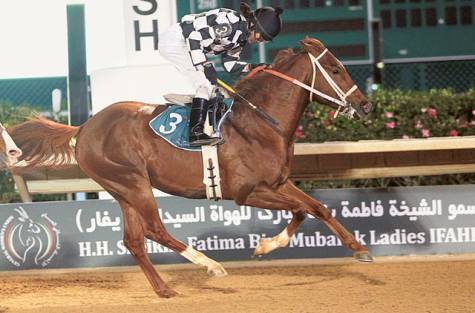 The four-year-old was impressive as he almost made it a start-to-finish affair, with Jose Figueroa guiding the rising star home with ease.
In second place was 60-1 long shot Status Symbol, while Mohammad Faisal Al Hammadi’s Its Far From Over finished third, ahead of last year’s winner of this race, Grilla.

The Texas-bred colt under Figueroa had earlier won the $30,000 (Dh110,160) Texas Shootout and, with Saturday’s win, he joined his full brother TM Fred Texas, who had won the Shaikh Zayed Bin Sultan Al Nahyan Cup in Delaware last year and prior to that had won the UAE President’s Cup in Kentucky.

“I was very confident he would run a great race,” said owner-breeder Toad Moak. “To win with such good horses like Grilla and Rich Frynchman running is credit to his potential.”

While Rich Frynchman finished sixth, Grilla’s trainer Bill Waldron said his horse was bumped early and that prevented the front-running star from finishing on top.

“We are glad that such large numbers turned out and cheered for the two Arabian races that we staged here tonight,” Sawaya said.
“We have another great night ahead when we stage the 2012 Shaikh Mansour Bin Zayed Al Nahyan Global Arabian Flat Racing Festival Darley Awards and The Shaikha Fatima Bint Mubarak Darley Award here in Houston tomorrow [Monday] night.”