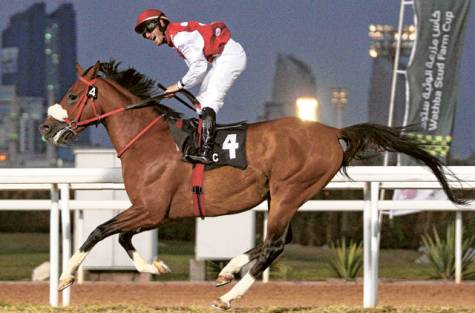 Abu Dhabi: Daffagh Al Asayl chose the middle leg of the Arabian Triple Crown at the Abu Dhabi Equestrian Club on Sunday evening to record his first success in the UAE.

Daffagh Al Asayl had finished in the first four in all his previous three UAE starts since joining Ernst Oertel and was able to reverse form with Naseem, who had beaten him in both the first round of the Arabian Triple Crown and the UAE Derby.

Ridden by Dubai World Cup-winning jockey Mirco Demuro, it ran out a comfortable winner and Oertel said: “We have always believed in this horse and that this trip would be ideal. Obviously, Naseem was penalised tonight and we have taken full advantage in style.”

Another horse reversing form with an old rival carrying a penalty was AF Sanadek who landed the Emirates Colts Classic for trainer Eric Lemartinel, with Gerard Avranche in the saddle.

Beaten on his penultimate start by Okba, who was only third on this occasion, Avranche’s mount had subsequently won a maiden over the same 1600m as Sunday’s contest and the jockey explained: “He is a nice young horse and hopefully improving all the time; that was only his fourth career start and it would be nice to think he can improve further.”

Trainer and jockey were completing a double having combined with Ibn Battuta Monlau to win the preceding 2200m maiden. Avranche said: “He did not enjoy the softer ground last time, so the strong winds drying out the track has certainly helped him.”

Tadhg O’Shea, in the saddle for Doug Watson, said: “He is a tough horse, a typical ex-Mark Johnston type. He has fought hard and seen off at least four challenges despite getting tired close home.”

A quality 2200m conditions race was won by the fast improving Versac Py, trained by Erwan Charpy and partnered by soon-to-retire Richard Hills who said: “He is a real tough horse but also has a touch of class; he won at Sharjah only last week and has come back out quickly and won again. He is not the biggest but has a big heart and a proper engine.”

Racing opened with a 1600m maiden and Wajfah W’RSan provided trainer Jaci Wickham with another winner. Richard Mullen was in the saddle.

Enduro Online: Global Arabian races get underway at Down Under