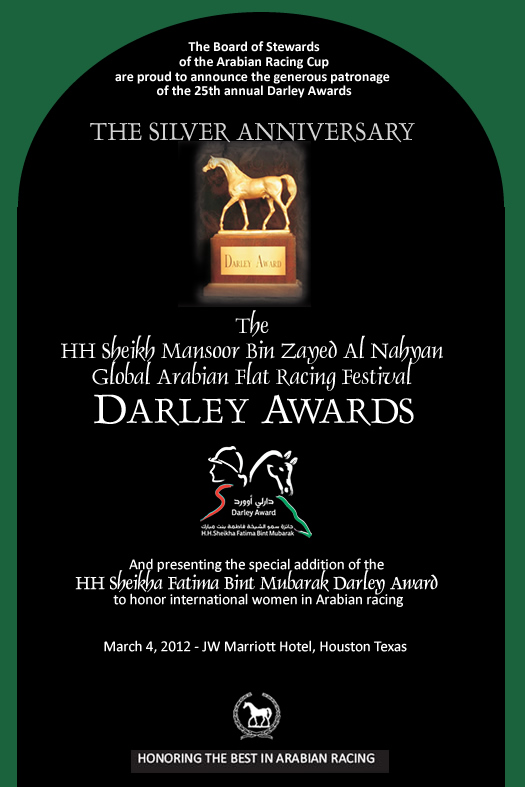 January 5, 2011 ~ The Arabian Racing Cup announced the American finalists for the 2012 HH Sheikh Mansoor Bin Zayed Al Nahyan Global Arabian Flat Racing Festival Darley Awards. The champions from these finalists will be presented at the awards ceremony on March 4, 2012.

The Darley Awards were founded in 1987 to honor the best in Arabian horse racing. This distinguished ceremony recognizes the most outstanding racehorses, jockeys, owners, trainers and breeders of the Arabian horse racing community. The Darleys are likened to the “Oscars” of Arabian racing.

Lara Sawaya, Director of the HH Sheikh Mansoor Bin Zayed Al Nahyan Global Arabian Flat Racing Festival based in Abu Dhabi, UAE, has graciously arranged the details of the prestigious event which will receive guests from around the world. The JW Marriott in Houston, Texas is the setting for this important 25th anniversary of the Darleys.

Adding to the excitement, Sawaya also manages new international awards that create a whole new dimension to the 2012 Darleys. With special gratitude to Her Highness Sheikha Fatima Bint Mubarak, five special Darley Awards are to be presented in her name to women of distinction in Arabian racing. The finalists for these awards are determined by an international panel of judges and results are forthcoming.