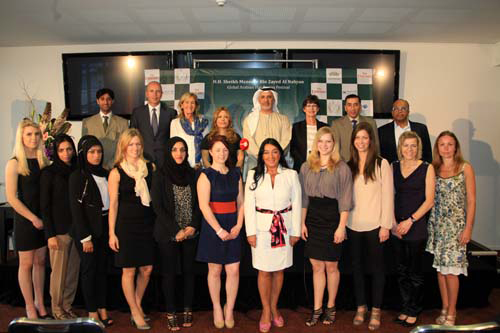 Both races are held under the umbrella of the Shaikh Mansour bin Zayed Al Nahyan Global Arabian Flat Racing Festival and carry a total prize-money of $25.000 and $20.000 respectively.

Seven runners have been declared for the Shaikh Zayed Cup while a similar number of contesters will battle it to the wire in the Shaikha Fatima Cup, the world’s most prestigious and richest Arabian races of their kind.

“It’s something great to start my title defense campaign with a dream ride at this beautiful venue,” said the Norwegian young girl during the draw ceremony at the historic facility on Wednesday.

“I have partnered six winners last year and lifted the trophy which I’m here to defend. Trainer Lew Hyson told me that the seven-year-old Aqaba has won on debut and looks good to go for a double on reappearance. This is definitely good news and something encouraging start with,” she said.

Meanwhile, UAE will be represented by Shathra Al Hajjaj who will unite with the 13-year-old gelding Cedar Ridge Fire ‘N’ Gold.

“Above all, I would like to thank HH Shaikha Fatima bint Mubarak, the mother of the UAE, for availing me the opportunity to fly the flag of my country around the globe. And I’m truly obliged to Shaikh Mansour bin Zayed Al Nahyan, UAE Deputy Prime Minister and Minister of Presidential Affairs, the patron of the global racing festival for all support and backing he has been providing for UAE women to gain self confidence and trust,” she said.

The 27-year-old amateur lady jockey has just failed in the opener when finished closed second in Muscat a couple of weeks ago.

“I have dropped the whip in the last furlong and as you may know a jockey without his or her whip is like a soldier without his weapon,” she said with a smile.

Shathra said she didn’t know much about her Friday’s mount but she was told that it’s his first time out although he’s 13!,” she said.

Azhar Al Wardi represents the Sultanate of Oman in the race and will be riding Alchimia, an 11-year-old gelding who’s making his second start after finishing third on debut.