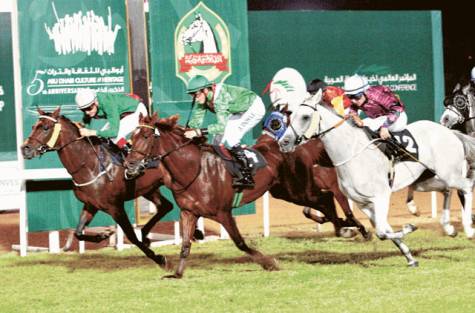 Doyle, who on his last visit here a fortnight ago won his career-first Listed race, began 2012 winning the opening two races but was denied a shot at a third victory when his horse Al Gharaaf W’rsan refused to get into the stalls and was a late withdrawal.

As fate would have it Doyle was also denied victory in the fourth race when Mudallal Al Reef was just beaten by a nose.

Doyle rode his first winner of the year on trainer Anthony Manuel’s Al Waqqad where he delivered a perfect finish to beat Shajaret Eddor Al Reef ridden by Jesus Rosales in the final furlong.

“It was great to start the New Year with a win. Though he [Al Waqqad] made hard work of it he did well to finish it off. I hope he will come on from this and improve,” said Doyle.

In the second race, the trainer-jockey combination struck again and this time they struck with BH Almozieg, a reserve horse who received a late entry into the seven-furlong maiden race for unrated UAE-bred horses.

The four-year-old son of Burning Sand seized the gap with about a furlong to go to finish ahead of another reserve horse Kana’an.

“He did it nicely. He broke well and was placed well. I was quietly confident,” said Doyle after BH Almozieg’s win.

“It was just a case of getting a split and he got that it was he did well to win,” said the Englishman who has now registered his 17th win in his debut season.

While Doyle’s horse was withdrawn in the third race, the talented rider almost pulled it off in the fourth race.

In a thrilling finish, Naseem Al Reef under Gerald Avranche was heading to the post with less than half a furlong left when Jawhara Al Reef joined the battle but Doyle on Mudallal Al Reef came between them with a searing finish to just fall short of winner Naseem Al Reef by a nose.

Ffrench’s double came on Tresor De Faust in the Wathba Stud Farm Cup and then in the only race for thoroughbreds when he steered Garbah to an easy win.

One of the most impressive winners of the night was Thakif, a three-year-old chestnut colt by Mahabb that was making his UAE debut for owner Shaikh Mansour Bin Zayed Al Nahyan, Deputy Prime Minister and Minister of Presidential Affairs.

Thakif had run in Group One company in Europe before coming here and scored a massive seven-length victory, cruising home under jockey Harry Bentley. It is the first win for Thakif which is now in the yard of trainer Majid Al Jahouri.