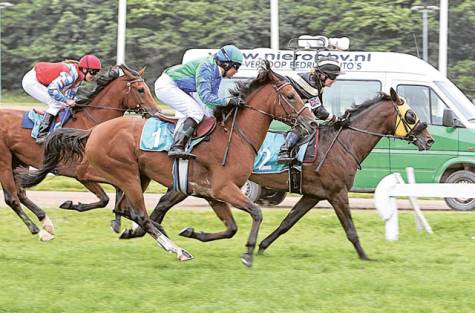 It was a historic afternoon at the 150-year-old racecourse when first the Shaikha Fatima Bint Mubarak Ladies Fegentri Cup made its debut as part of the Shaikh Mansour Bin Zayed Al Nahyan Global Arabian Flat Racing Festival, two Emirati jockeys made a sound start to their racing careers and the 20-year-old King notched up her third win in the Fegentri series this season.

King, who works as a Racing Secretary for leading trainer Clive Cox, notched up her third win in five starts in the Fegentri Series, looks set to pose a strong bid for Swede Henriksson’s crown.

“I won in Oman and also in Qatar so I seem to be doing well with Arabians,” said King, after steering Sankado to his second win here in Duindigt. “It was an amazing race. As we approached the home stretch there was a gap on the rails and I managed to seize it,” said King.

“The trainer had told me to keep him until the final 50 metres and then let him go and I just did that,” said King, who rode a winner for jockey-turned-trainer Pat Eddery last year in the Queen Mother’s Cup at York.

“This is a huge win and I will have to put off the celebration as I will be on the flight tonight,” said King, who work riders for Cox and in the day doubles as a secretary while taking time out for competitive races.

Meanwhile, Fatma Al Merri on Vantage Lady finished fifth while Shahtra Al Hajjaj on Tarfa finished 7th in their flat-racing debut. Fatma did well to pick up on the Jean-Pierre Totain-trained Vantage Lady. For Shahtra the debut was tough.

“I was waiting for a sign to tell me 200 metres was over and I did not realise the bend was there and I struggled a bit there,” said Shahtra and already seemed to be learning fast. “I feel so blessed for this experience. It was amazing and hopefully we will do better the next time, surely learning from our mistakes,” said Shahtra.

Totain, meanwhile, praised Fatma and said she always showed the promise and once again showed that in the race. Noura Khalifa Al Suwaidi, Director of the Emirates General Women’s Association and chairperson of the UAE Women Sport, gave away the trophies to the winners.