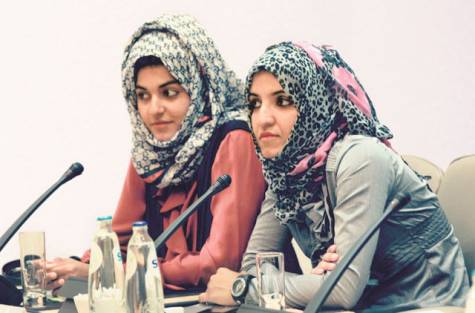 The Hague, The Netherlands: Ahmad Al Ajtebi rose from the ranks of a camel jockey to become a world-class flat-racing jockey and today two women endurance riders will take a huge step in creating history by becoming the first Emirati lady jockeys.

Fatma Al Merri and Shathra Al Hajjaj wore a look of pride a day before they race in the ¤20,000 Her Highness Shaikha Fatima Bint Mubarak Ladies Fegentri Cup, taking on rivals from the region as well as from around the world.

“I have been training hard and am looking forward to a good race tomorrow. More than winning I am looking to ensure I rise up to the expectations as it is a huge moment when the stalls open and I get off the blocks,” said Fatma, who will be on a temperamental mare Vantage Lady trained by big-race winner Jean Pierre Totain.

Shathra, who will be racing on the Jean Francois Bernard-trained Tarfa, said she was ready for the challenge. “Just a couple of months ago I could not get off the racehorse but the hard work seems to have paid off and I am confident,” said the rider.

The 2010 Ladies Fegentri World Champions Tina Henriksson has been drawn to ride Athlete Del Sol, a recent winner of the Wathba Stud Farm Cup. Henriksson should be starting off as the favourite though Qatar’s experienced Khadija Al Bastaki is on an equally good horse — Nil Ishn Ibn Al Sabke.

While the two Omani jockeys Fatma Al Manji and Azhar Al Wardi complete the region’s five lady jockeys in the fray, British Rachel King also expressed her confidence. “I have come second in a race in Qatar and also won a race in Oman earlier this year. Sankado is a good horse I heard but I will be racing on him for the first time and looking forward to this richest race for us amateurs,” King said.

Noura Khalifa Al Suwaidi, Director of the Emirates General Women Association and chairperson of the UAE Women Sport who is present here to support the Her Highness Shaikha Fatima Bint Mubarak Ladies Fegentri Cup said: “It is a huge step for our two UAE jockeys and the other lady jockeys from the region to come here and compete with international jockeys. We wish them the best of luck.”