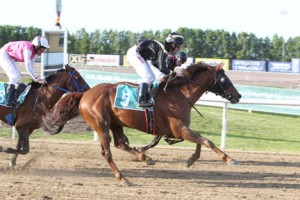 It was the fourth event in a 21 stage world-wide series designed to reinvigorate and encourage the Arabian horse racing industry globally to preserve Arab culture and traditions.

UAE ambassador to Sweden Her Excellency Shaikha Najla Mohammad Al Qasimi was on hand to distribute the trophies to Bachi’s owner/trainer CJF Nibbering from Holland said: “It’s all down to the jockey. Normally Bachi is a long distant horse. I told the jockey not to wait but attack and he did just that.”

Bachi’s jockey Shane Karlsson said: “I thought I had a chance on the homestretch but I never thought I was going to win. I had to push him all the way. He has no speed he just goes. I thought he was done towards the end so it’s kind of a surprise to win.”