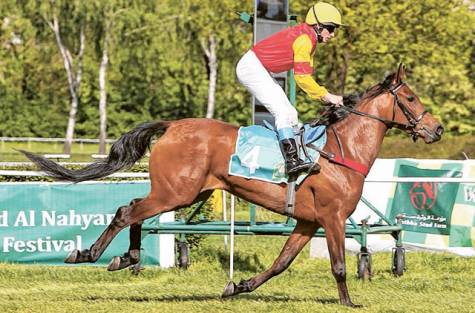 Trained by Dorota Kaluba the three year old stayed in the rear for most of the race, but once approaching the final two furlongs, Wasiutow brought Piawella to the front and after that it was a one-horse race.

The 1,800-metre race attracted seven of Poland’s top three year olds and after Otava did the early running it was Cejlonka which hit the front on the home straight, but once Piawella made the move there was only one winner. The winning time was 2 minutes 10.9 seconds and the winning distance was five lengths.

Al Rahma said: “The selection of Poland as a venue to stage this race reflects the strong relations that the UAE and Poland enjoy. Poland has a rich history of Arabian race horses and such races will strengthen the bond between the peoples of the two countries.”

Lara Sawaya said: “We will now be moving to Sweden for the Shaikh Zayed Bin Sultan Al Nahyan Cup race and there we will be making another important announcement regarding the Festival’s activities.”

Dubai- Big N Rich, landed the ninth edition of The Wathba Stud Farm Cup at the Ghlin Racecourse in Belgium