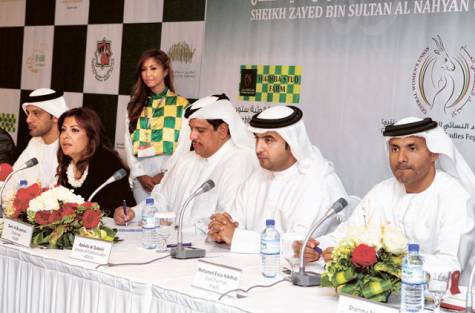 “There have been a lot of big races that have been promoted by many bodies in the region. But many small breeders had stopped their breeding as they felt neglected. Now the Shaikh Mansour Bin Zayed Al Nahyan Global Arabian Racing Festival has revived Arabian racing at the lower levels and has also revived the market for these breeders and owners,” Sami Al Boueni, IFAHR Chairman, said during a press conference yesterday.

Abdullah Al Qubaisi, Communications Chief of Abu Dhabi Authority for Culture and Heritage (Adach), unveiled the calendar of events of the Festival, which is being held for the third year running. “The Festival has made a global presence at the global arena and our strategy has been to focus on Arabian horse racing which has been our tradition,” Al Qubaisi said.

The Festival’s Director Lara Sawaya said the calendar of events for 2011 were bigger and better. “For the first time ever, races for women jockeys will be held in association with the UAE General Women’s Union under the wise and able leadership of the Union’s Chairperson Her Highness Shaikha Fatima Bint Mubarak,” she said.

IFAHR and Dubai Equestrian Club Vice-President Mohammad Eisa Al Adhab hailed the impact of the Festivals races for small breeders and new owners. The series has created a great momentum and a great expansion of Arabian horse racing,” the Dubai official said.

The Abu Dhabi Sports Council pledged to support the activities of the Festival and its Secretary Talal Al Hashmi said,” This Festival and its events is a translation of our plans to support sport inside and outside the UAE, particularly equestrian sport.”