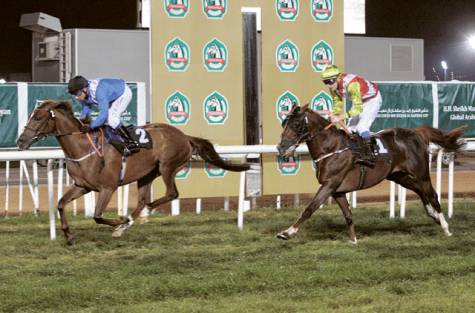 Champion Jockey Tadhg O’Shea landed the spoils on Takaamul in the colours of his main employer, Shaikh Hamdan Bin Rashid Al Maktoum, Deputy Ruler of Dubai and Minister of Finance, on Sunday evening.

With Richard Hills choosing to partner stable companion Menwaal, O’Shea was the beneficiary on the Gill Duffield-trained winner on whom he was always close to the pace. He said: “It was a decent race and he has stayed on nicely. Gill’s horses are in great form.”

The first handicap over course and distance was won by the Eric Lemartinel-trained AF Dhaham who was completing a course hat-trick and initiating a double on the card for O’Shea who said: “He is improving and very versatile. They went quick which has really suited and hopefully there is more to come.”

The jockey also partnered the easiest winner of the night, Boss Professor in the concluding 1,400 metre maiden, the only Thoroughbred race on the night. He is trained by Ali Rashid Al Raihe, still fresh from his Meydan Carnival double on Thursday evening.

Trainer Duffield was to complete a 2,200metre handicap double of her own but it was Ted Durcan in the saddle on Sharakka who won the night’s penultimate event to deny Lemartinel’s Barag. Trainer Jaber Bittar was responsible for two of the 1,600 metre maiden winners with debutants Mudallal Al Reef and Ferass winning under Pat Cosgrave and Jesus Rosales, respectively.

Promising starts The third such maiden, restricted to fillies and mares, was won by Wayne Smith on the Julio Peromingo-trained AF Sataah. All three look capable of building on these first wins.