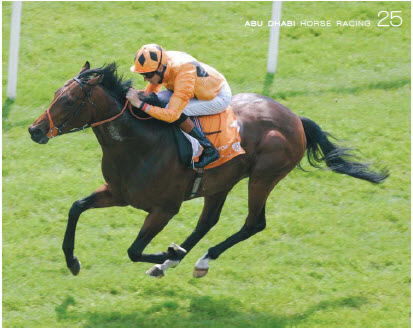 In the pre-dawn silence, as the mist begins to rise over the tree-lined streets in Abu Dhabi’s affluent embassy district, the first shadows of horses and their jockeys begin to thunder down the turf at the Abu Dhabi Equestrian Club.Galloping past the vacant grandstands in groups of six or seven, the horses snort in the crisp air, their tails held proud and high.

A few early risers roll up the gravel driveway to the clubhouse, swapping their Bentleys for golf buggies and a morning round on the club’s luscious greens. If thoroughbred racing is the sport of kings, Arabian racing is the sport of sheikhs. The Arabian horse racing industry is enjoying a worldwide renaissance,largely due to the cosmic popularity of the HH Sheikh Mansoor bin Zayed Al Nahyan Global Arabian Racing Festival. The festival was set up in conjunction with Abu Dhabi Authority for Culture and Heritage (ADACH) who were eager to throw the spotlight on the country’s equestrian traditions. “We are here to promote the Arabian horse to the world by way of Arabian horse racing,” explains Lara Sawaya, director of the racing festival. “This is the culture of the UAE; it’s our heritage.” Behind the race track lie two immaculate stable blocks housing 90 purebred Arabians.

As the outside world begins to stir, the club’s grooms and trainers – whose day began at 4am – move through the stables and saddle their mounts. French trainer Eric Lemartinel is one of the people fuelling the Arabian success story here in Abu Dhabi. A former steeplechase jockey and thoroughbred trainer in Normandy, Lemartinel became the trainer in residence after moving to the UAE on invitation from HH Sheikh Mansoor. Every morning he puts his horses – he has 30 under his direct watch – through an hour of rigorous training. “Yes, sometimes I miss thoroughbreds, for their speed,” he admits, pulling on his riding boots. “But I love Arabian horses for their intelligence.

They’re too smart to always give 100 percent; and they’re more of a challenge to train, which I enjoy.” He gives his track riders a leg up into the saddle, and together they trot out down towards the track. One of the aims of HH Sheikh Mansoor’s festival was to help generate a better market for the smaller Arabian horse breeders within the UAE and around the world, many of whom struggle to compete with major horse breeding studs. The festival itself is divided into two sections, and in Bred under the arid desert sun, drawings of Arabian horses were found in rock carvings along the Arabian Peninsula as early as 2,500 BC.

Legend has it that the Bedouin tribes created the breed based on four winds: spirit, strength, speed and intelligence. “During the racing season, which goes from November to March, we ride every day,” Eric calls, preparing the second feed of the morning, as a sleek chestnut gelding is being hosed down in the concrete wash bay. “This is a very good horse – one of the best,” Eric says, offering a carrot as the horse cranes his neck and whinnies softly. “Shadiyda, owned by HH Sheikh Mansoor bin Zayed Al Nahyan”, is written on the stable name plate. 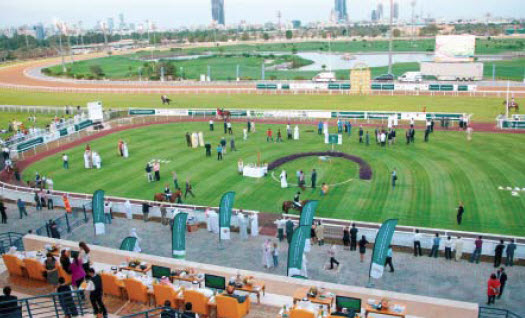 Weeks later, as the sun sets over Abu Dhabi Equestrian Club, the press and guests roll in for the final showdown of the Mansoor Festival: the Sheikh Zayed bin Sultan Al Nahyan Prestige Cup. Thirteen horses, including Shadiyda, are led across the manicured lawn. Hands are shaken and trophies polished. Tonight is the culmination of eight months of international Arabian horse racing. Jockeys scurry across the grass in bright silks and talk last-minute tactics with the trainers. Stirrups are adjusted, blinkers are fitted, and horses and riders led to the barriers.

The rich dusk gleams across the track and fills grandstands. Silence falls over Abu Dhabi Equestrian Club. “And… they’re off!” cries the commentator. Shadiyda is the first horse past the post, covering 1,600 metres in just one minute 43 seconds. The world’s horse racing industry is watching closely. “Abu Dhabi is one of the true homes of Arabian racing,” says Genberg from his office in Sweden. “Not only in terms of this being a city with many fine races, but many of the major sponsorships of international Arabian racing are also there. This reached new levels with the world’s first Global Arabian Racing Festival in Abu Dhabi.”

As Shadiyda is paraded around the springy turf, and the winner’s trophy and plum purse of AED 120,000 presented, Abdullah Al Qubaisi, director of ADACH’s communications department, takes to the microphone. “It has given us great satisfaction as the final race for the 2010 HH Sheikh Mansoor festival brought an end to a highly successful series,” he announces. “We congratulate all the winners and hope that the series will help create awareness in purebred Arabian horses all over the world.”“This race has been held for the first time,” says Sawaya proudly. “What’s happening with Arabian horse racing here is a world first.” As the world’s racing heavyweights turn their eyes to the UAE, the nation’s capital has made its mark as a global leader in Arabian horse racing. 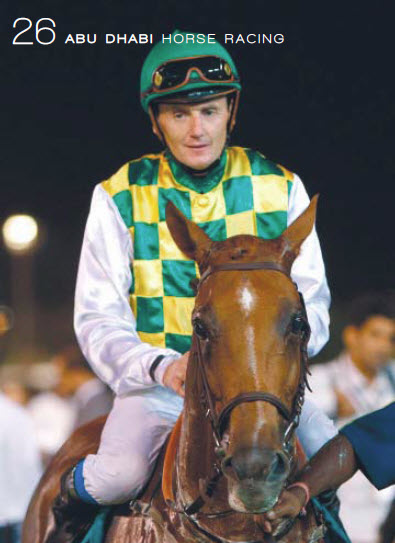 2011 will run for the third consecutive year. Locally, it hosts the Wathba Stud Farm Cup, which holds 15 races for Arabian horses bred within the UAE, and at AED 40,000 per race offers one of the most generous prize purses in the region. While the classic Arabian show horse has a distinctive dished face and fine limbs, the local breed of the hot-blooded Arabian race horse is a larger, more solid looking animal, like the proud white stallion that HH Sheikh Zayed, the founder of the UAE, loved to ride. “The races encourage people to invest in breeding, and buy the UAE breed of Arabian horse,” explains Sawaya.

Internationally, the festival has toured seven countries, generating interest and excitement from Arabian horse owners and breeders around the world. “The festival raised the level of attention to Arabian racing when it visited so many countries around the world, not only by investing money, but by showing local racing organisations that this is an important sport to people in the UAE,” says Mats Genberg, secretary general of the International Federation of Arabian Horse Racing Authorities. “Arabian racing is key to establishing relationships with people and businesses.” As the sun rises, the air drips with humidity.

Eric’s riders walk, trot and canter methodically around the track. “I ride alongside them because it’s the best way to train,” Eric says, cantering along the dewy grass and offering sporadic words of advice. “There is absolutely no difference between training methods for thoroughbreds and Arabian horses. On Monday, after the race on Sunday, we are relaxed with them, and then we build the horses up slowly over the week.”