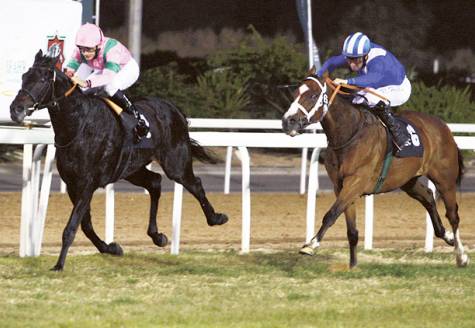 Abu Dhabi: Champion jockey Tadhg O’Shea gave himself the perfect start to the New Year when landing a double at yesterday’s first meeting of 2011 at the Abu Dhabi Equestrian Club.

O’Shea first winner of the New Year came with favourite Af Dhaham in the Wathba Stud Farm Cup, a conditions race for Purebred Arabians over 1400 metres, before he revisited to the winner’s enclosure after producing a classic come from behind finish aboard Takaamul in a rated conditions race over 2,200 metres.

On both occasions O’Shea, who won the UAE’s jockey’s championship last season with 35 wins, showed an impeccable judge of pace to prevail by narrow margins.

The Irish rider also helped Lemartinel complete a meet double with the French handler having earlier won the Al Dirnari handicap over 1,600 metres with the David Smith-ridden Naseem Al Reef.

Kildare-born Rory Cleary picked up a spare ride as a replacement for an indisposed Darragh O’Donohoe and made the most of the opportunity to win the Purebred Arabian maiden over 1,600 metres with Jibril. But not before he dug deep to deny apprentice Antioco Murgia, who gave the chase aboard R Ben Atia-trained Sami Al Mels. A half a length separated the pair at the finish.

Talented apprentice Harry Bentley continued to impress when he won the meet’s only thoroughbred race for his boss Satish Seemar with Warriors Key.

Bentley rode a well-judged race aboard the seven-year-old, who showed solid improvement after his seventh place effort behind Escape Route in the HH The President Cup Prep at this course on December 12.

Commenting on the horse’s performance Bentley said: “He had a great run throughout the race. No traffic problems and he quickened nicely when I asked him to. He looks like a nice horse.”