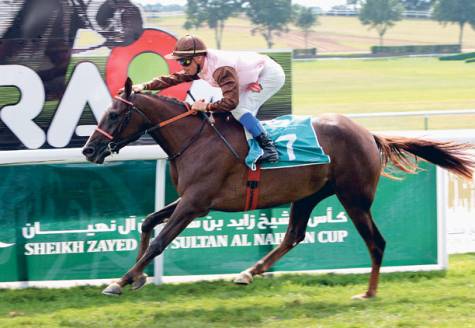 Ridden by Jean-Francois Eqeum, the three-year-old filly followed up her impressive debut win by outclassing favourite Musharab by more than four lengths to ensure trainer Bernard ended the Shaikh Mansour Festival on a dominant note.

Bernard’s Muqatil Al Khalidiah had earlier won the Duindigt, in Holland, and in Warsaw. Kiss De Ghazal gave him more reason to celebrate as she was in great form on Saturday recording her second successive win in the 20,000-euro (Dh73,436) race.

Speaking to Gulf News from Craon, Bernard said, “I knew she had the quality to last the distance and she did beat some good colts. I am extremely happy with the results in this year’s series and I hope these three-year-olds go on and live up to their early promise.”

The race was the sixth in this year’s Shaikh Mansour Bin Zayed Al Nahyan’s Global Arabian Flat Racing Festival being organized by Abu Dhabi Authority of Culture and Heritage (ADACH).

Abdullah Al Qubaisi, director of communications at ADACH, said in a statement: “Craon is a historic race course in France and it’s very significant for our international campaign to promote Arabian horses which reflects positively on the county’s image and heritage.”

Lara Sawaya, director of Shaikh Mansour Bin Zayed Al Nahyan’s Global Arabian Flat Racing Festival, said: “The success of the race was evident from the eagerness of the owners of Arabian horses to participate in the race carrying the name of the late Shaikh Zayed, as well as the presence of large number of race-goers at the race course today”.