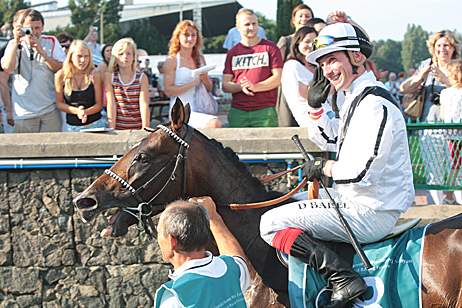 WARSAW // Arabian thoroughbreds are said to be as unpredictable as they are beautiful, but yesterday at the Sluzeweic Racetrack in the Polish capital, the Sheikh Zayed bin Sultan Al Nahyan Cup unravelled exactly as expected.

Saddled by the Frenchman David Badel, Al Khalidiah, who started the 2,600-metre race as favourite having triumphed in Den Haag, Holland last month, comfortably held off the challenge of second-placed Vasyli Kossack, the Poland-based Dutch horse, and third-placed Djelana, of France.

“The crowd was very good, the horse was fantastic and everything has gone great,” said Badel.

“It’s great for me to win and I am very happy because it is the second time for me to win a race of this type; an international race sponsored by Sheikh Mansour.”

Badel’s victory on Muqatil al Khalidiah saw the Saudi stable take a further five points on top of the five they collected in Holland. It means the Jean-Francois Bernard-trained horse tops the Zayed Cup rankings and the stable will be presented with a cheque for €20,000 as well as the Zayed Cup in Abu Dhabi next month at the World Arabian Horse Racing Conference on September 23-25 at Abu Dhabi National Exhibition Centre.

“We are very proud of how [yesterday’s] event unfolded,” said Lara Sawaya, director of the festival. “More importantly, the race attracted an international field – three horses from France, horses from Sweden, Russia and the United States.

“That is one of the key objectives of the series. We appreciate that it is expensive to transport a horse across the world to Poland, so hopefully by offering the Zayed Cup and the bonus of €20,000, it encouraged more stables to consider making the journey.”