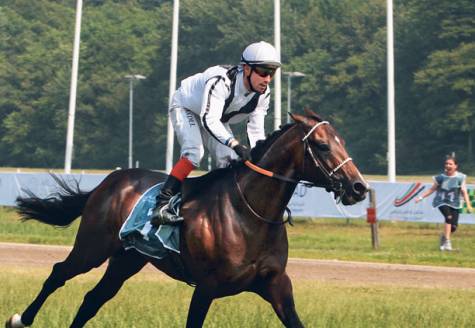 At stake is not only the prize money of 20,000 euros for today’s 2,600 metre race but this Poland event also decides the winner of the 20,000 euros three-race series which started in Toulouse, France.

Holland runner Periander with his four points after coming second to Scoubidou de Carrere in Toulouse is Muqatil’s main challenger though the Saudi raider has five points after his win in the next race of the series in Duindigt, Holland. While both these horses stand a chance of winning the Shaikh Mansour Bin Zayed Al Nahyan Global Arabian Flat Racing Festival’s bonus fund, any of the local challengers can also win if these two fail to figure in the top five.

Though Muqatil Al Khalidiah is the horse to beat the distance will be a huge test as the trainer himself had said after his win in Duindigt. “I will have to see how he recovers and the distance in Poland is a bit too much for Muqatil,” he said.

Celtis is the strongest having won the Polish Derby over 300 metres at the same venue while Vasyli Kossack, Kentauer Kossack and El Weiron could cause an upset.

“We are breaking new ground by organising this race here in Poland which does have a strong base for Arabian horses. This is only the start and hopefully after this race we will see more progress in Arabian racing here,” Al Qubaisi said.

Lara Sawaya, Director of the Festival said, “The three-race series seems to have gained a lot of interest and with two top horses coming here to Poland it does reflect the success of the bonus prize fund.”

Talal Al Hashmi of Abu Dhabi Sports Council said, “As much as this series is about racing, it is also about taking UAE’s culture to Europe. At ADSC we are always keen to be involved and support such endeavours.”