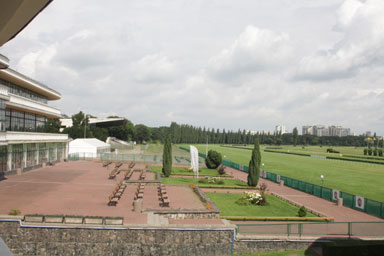 ABU DHABI – As many as 15 horses are in the fray in the Sheikh Mansoor Bin Zayed Al Nahyan’s Global Arabian Flat Racing Festival’s Sheikh Zayed Bin Sultan Al Nahyan Cup Race on Sunday, at the Sluzewiec racetrack in Warsaw, Poland.

But challenges are expected to come from Periander from the Netherlands, owned by Margaret DeRuiter and Celtics from Poland who won the Polish Derby, this year. Marwin El Samai is also a horse to be reckoned with, having won numerous races since 2006.

Abdullah Al Qubaisi, Director of communication at ADACH, on the eve of the race said: “The 2010 series of the Sheikh Mansoor bin Zayed Al Nahyan’s Global Arabian Flat Racing Festival has already visited four great racing venues and with Warsaw here in Poland being the fifth we are hoping for another great addition to the series”.

“I welcome all the racing officials, trainers, owners, jockeys and fans to Sunday’s race and hope it will leave a lasting impression. The fact that this race carries the name of the late Sheikh Zayed bin Sultan Al Nahyan makes it a memorable debut for the Sheikh Mansoor Festival in Sunday’s race in Warsaw,” he said.

“With a prize purse of Euros 20,000 this is the richest ever race staged in Poland for Purebred Arabians. This Warsaw race will also determine who wins a Euros 20,000 cash award – given to the horse with the highest total number of points from the three previous races – held in Toulouse, France, Amsterdam in The Netherlands and here in Warsaw, Poland,” said Lara Sawaya, Director of Sheikh Mansoor Bin Zayed Al Nahyan’s Global Arabian Flat Racing Festival.

Muqatil Al Khalidiah leads the competition with five points, one point more than Periander. Scoubidou de Carrere also has five points after winning the opening race in Toulouse, France, ahead Periander. But the colt is not figuring in Sunday’s entry list.

“Horse enthusiasts also stand a chance of wining cash awards by participating in the Pick & Vote (a free to participate tipping competition (Euros100,000) through our website www.sheikhmansoorfestival.com,” concluded Sawaya.

Enduro Online: Successful appearance for Arabian Races in Down Under