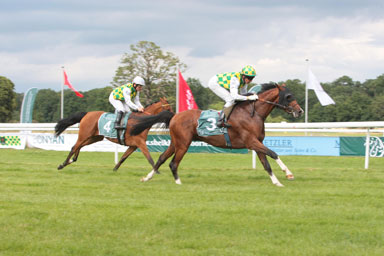 Saher the 3-year-old colt ridden by Philippe Sogorb and trained by Robert Litt came up with a solid finish to beat the Damien de Watrigant-trained Salaamah under Charles Nora as the green and yellow colours of Sheikh Mansoor swept the honours in front of a packed grand stand.

Both horses were bred by the Wathba Stables owned by Sheikh Mansoor and finished ahead of Belgian runner Kadesch DA under Filip Minarik.

“This is a great initiative by HH Sheikh Mansoor and will reflect in the bilateral ties between the UAE and Germany,” the UAE Ambassador said.

“Germany has a strong tradition in Purebred Arabian horses and with such a large gathering here only goes to show that this initiative is in the right direction and it must be continued,” Al Mahmood added.

“Despite the pouring rain just before the start of today’s meeting a large crowd turned up and it was a great event. It was nice to see families along with their children enjoy the meeting and watch some top Purebred Arabian horses in action,” said Abdullah Al Qubaisi.

Lara Sawaya said, “This year’s race here in Frankfurt was elevated to a ‘Listed’ race status and the presence of quality runners has enhanced this event.”

“Though Germany has not had strong runners this race has created a lot of interest and many connections were also keen to know about the first Arabian Racing Conference to be held in Abu Dhabi next month,” she added.

Talal Al Hashmi said, “We at Abu Dhabi Sports Council are thrilled with the success of the HH Sheikh Mansoor Festival which has been promoting both Purebred Arabian racing and the emirate of Abu Dhabi at every venue.”

Stephen Bowey, Communications Director of Invest AD said, “I have been to almost all the races in the HH Sheikh Mansoor Festival and the interest seems to be growing with each event. For us at Invest AD it is our privilege and commitment to help spread the UAE’s heritage and culture around the globe.”

After staging races in Toulouse, France, Duindigt in The Netherlands, Delaware in the US and here in Frankfurt, Germany, the HH Sheikh Mansoor bin Zayed Al Nahyan’s Global Arabian Flat Racing Festival’s next stop is in Poland on August 22.