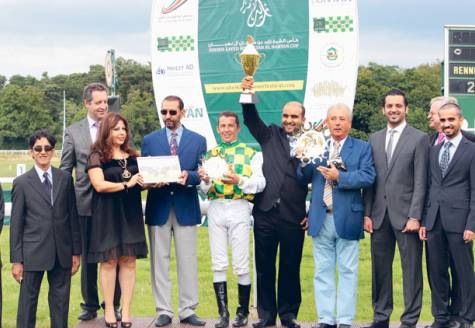 “The late Shaikh Zayed laid the foundation and now Shaikh Mansour Bin Zayed Al Nahyan, Deputy Prime Minister and Minister of Presidential Affairs, is taking it to a new level,” the envoy said.

“This is a great initiative by Shaikh Mansour and will reflect in the bilateral ties between the UAE and Germany,” the UAE ambassador said.

“Germany has a strong tradition in Purebred Arabian horses and with such a large gathering here only goes to show that this initiative is in the right direction and it must be continued. Today’s success is a signal that it must be done again and again,” Al Mahmoud added.

“Despite the pouring rain just before the start of today’s meeting a large crowd turned up and it was a great event. It was nice to see families along with their children enjoy the meeting and watch some top Purebred Arabian horses in action,” said Al Qubaisi in a press release.

Lara Sawaya said, “This year’s race here in Frankfurt was elevated to a Listed race status and the presence of quality runners has enhanced this event.”