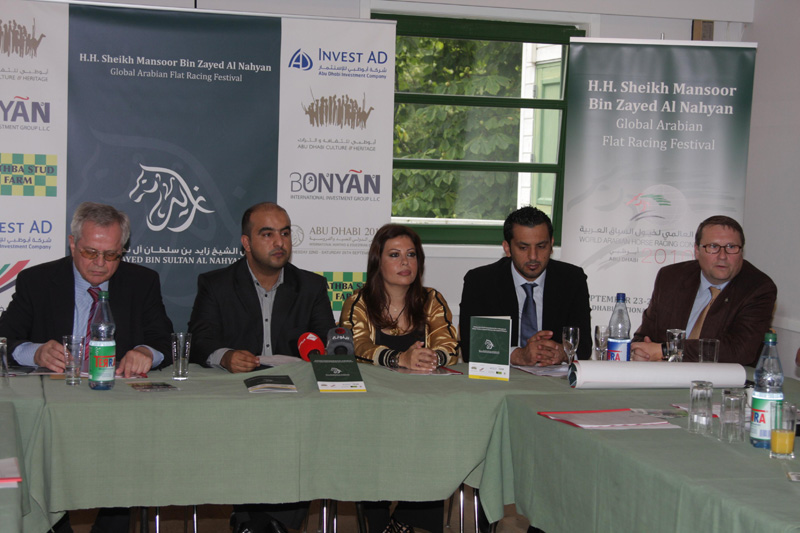 Hubert Lorenz of DRAV addressed a press conference at the venue on Thursday and said, “We are delighted to welcome the UAE’s support for this race for the second year. This year it is a Listed event and this has enhanced the status both of this race as well as our Arabian racing.”

“We expect a large crown on Sunday and we hope to confirm and extend our partnership with the great initiative by Sheikh Mansoor,” he added.

Abdullah Al Qubaisi, Director of Communications, Abu Dhabi Authority for Culture and Heritage (ADACH), the body that is behind the HH Sheikh Mansoor bin Zayed Al Nahyan’s Global Arabian Flat Racing Festival said, “We thank H.H Sheikh Mansoor bin Zayed Al Nahyan, Deputy Prime Minister and Minister of Presidential Affairs for reviving the traditions of Arabian horse racing all over the globe. All this would not have been possible but for the vision and support of HH Sheikh Mansoor.”

“It is also a great honour for ADACH to be here in Frankfurt and stage a race when the Frankfurt racecourse is set to mark 150 years of racing,” Al Qubaisi said.

“This year’s series has been gaining a lot of exposure and the connections of Arabian horse racing in Europe are pleased with the progress so far,” the ADACH official said.

Lara Sawaya, Director of HH Sheikh Mansoor bin Zayed Al Nahyan’s Global Arabian Flat Racing Festival, also addressed the press conference and said, “This race will be live on Abu Dhabi Sports Channel and we are happy that racing fans in the UAE will get to watch some German racing. Fans will also be keen to follow the progress of the ‘Pick & Vote’ competition in which they are already taking part.”

“I welcome German racing fans to visit the website www.sheikhmansoorfestival.com and take part in the competition. I would also like to thank the officials of DRAV and the Frankfurt racecourse for their support,” Ms Sawaya said.

The Abu Dhabi Sports Council, under whose umbrella most of the nig events in the emirate of Abu Dhabi are being staged, was represented by Talal Al Hashmi. The ADSC official said, “Under directives of HH Sheikh Hazza bin Zayed Al Nahyan, the ADSC is keen to support such events both in UAE and abroad as they help carry our culture and heritage far and wide.”

“I am excited to be here and watch Arabian horses take part in flat racing and I will all connections success on Sunday,” Al Hashmi said.

Peter Schwierz, representing the Frankfurt racecourse said, “This venue marks 150 years of racing. With the Arabian race gaining in status this year we are expecting a fairly large crowd on Sunday. It will be one huge family affair and we are hoping that it will trigger fresh interest in Arabian racing in Germany.”