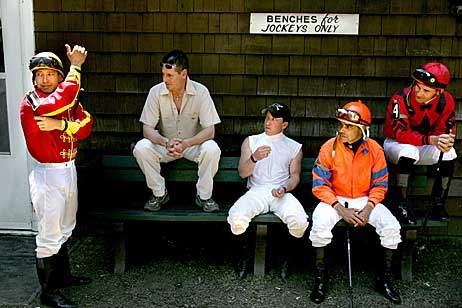 Nine horses are vying for the prestigious Sheikh Zayed bin Sultan Al Nahyan Cup, with a total prize fund of US$40,000 (Dh146,920) on offer.

Abdullah al Qubaisi, the communications director of Adach, said: “It is a great moment for Arabian racing.”

Attendance at Delaware Park is expected to be strong today because the Delaware Handicap Grade II race, with a purse of $750,000, is also on the schedule.

“The racecourse is expected to be full of racing fans that will get to see the Arabian horses in action,” al Qubaisi said.

Lara Sawaya, the director of the festival, said today’s races “are part of the Delaware Festival of Racing’s second weekend of top-class racing which also features the Delaware Handicap and our race to promote Arabian horses.”

“The racecourse will be busy from morning on Saturday as it starts with a Breakfast at the Park and then a special sky-diving event will be followed by a hat giveaway event,” she said.

“There will also be a chance to win an all-expense-paid trip to Abu Dhabi for the 2010 World Arabian Horse Racing Conference and gala dinner and the opening of the ADIHEX 2010 Abu Dhabi International Hunting and Equestrian Exhibition.

“Coupons will be available to fill out at the venue and fans must be present to win when the draw takes place after the Sheikh Zayed bin Sultan Al Nahyan Cup race,” she said.

Stephen Bowey, director of communications at Invest AD, ewas pleased that the racing festival is making its debut in the US.

“Delaware is one of the most famous racing venues and for an Arabian race carrying the message of the UAE and its support for the breed is a great moment,” he said.

“It will be a great way to boost the sport of Arabian racing and help preserve this traditional sport of the UAE.”

After the Toulouse and Duindigt races in France and Holland respectively, this is the third in the series.

Meanwhile, Godolphin’s Campanologist bids for an elusive first Group One success in the Deutschland Preis-Grosser Hansa Preis over a mile-and-a-half at Hamburg today.

The consistent, five-year-old son of Kingmambo has posted three good efforts at the highest level already this season, including a clear third in the 12-furlong Gran Premio di Milano at Milan’s San Siro racecourse on June 13.

“Campanologist has been working well and I have been pleased with his preparation,” Saeed bin Suroor, the trainer, said.

“He has run some good races so far this year but this looks like another tough Group One contest. A mile and a half is his best trip and I am hoping that he can make the frame once more.”