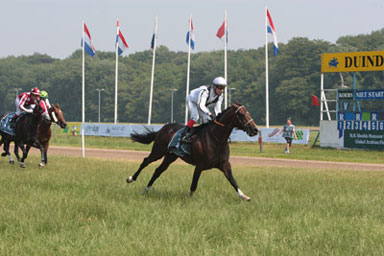 jockey David Badel brilliantly rides Khalidiah to win 13-horse race by four and a half lengths.

Trained by Jean-Francois Bernard and owned by the Al Khalidiah stables from Saudi Arabia, the 5-year-old was too good in the 13-horse race and won by four and a half lengths from Qatar’s Al Anqa (trained by Alban de Mieulle and ridden by David Bouland) with Baddad, owned by owned by Sheikh Mansoor bin Zayed Al Nahyan, Deputy Prime Minister and Minister of Presidential Affairs in third place. Baddad was ridden by Charles Nora and is trained by Jean-Pierre Totain.

Ali Thani Al Suwaidi, UAE Ambassador to The Netherlands said, “Last year this race was a huge success and this year it is carrying the name of the late Sheikh Zayed bin Sultan Al Nahyan, who played such a pioneering role in promoting Arabian horses. This race along with the many others to be held this season here in Holland with support from

Sheikh Mansoor bin Zayed Al Nahyan, Deputy Prime Minister and Minister of Presidential Affairs will boost the ties between UAE and Holland and I thank him for that.

” Abdullah Al Qubaisi, Communications Director of ADACH said in a message, “To be part of the famous Dutch Derby and to ensure the Purebred Arabians get to race on one of the biggest race meeting’s in The Netherlands is a huge boost to our efforts.

” Gilles Bescmoor Plug, Dutch Ambassador to the UAE expressed his high appreciation and thanked the UAE for this support. “This is a great step ahead to boost Arabian horse racing in The Netherlands,” he said. Lara Sawaya, Director of Sheikh Mansoor bin Zayed Al Nahyan Global Arabian Flat Racing series said,

“Though later this evening The Netherlands is playing its biggest match, we are delighted with the fairly large crowd that has turned up to watch the race today.” “A large number of fans are also following this race series from around the world and today’s race was another success,” she said. Adnan Sultan, Director General of Abu Dhabi Equestrian Club said,

“Many owners and trainers are very happy with this series and I thank the UAE leadership for raising the status of Arabian horses here in Europe.

” “Such events build bonds and they in turn boost other relationships and one of this is the business angle. We are proud to be part of this series and for the second year this Duindigt race has worked well for us,”