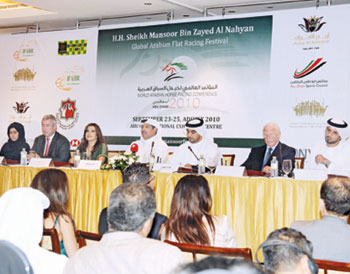 “This is the first time ever that a world conference is being held with a special focus on Arabian horse racing,” Abdullah Al Qubaisi said. “We are very thankful to Shaikh Mansour bin Zayed Al Nahyan, Deputy Prime Minister and Minister of Presidential Affairs, under whose patronage the event is being held. As you are already aware, ADACH, through the Shaikh Mansour bin Zayed Al Nahyan Global Flat Racing Festival, has played a huge role in activating the support and spread of Purebred Arabian horses both at the UAE level and on the global stage,” he added.

The conference will draw hundreds of experts, researchers and others involved with Purebred Arabian horse racing from more than 20 member countries from around the world as well as non-members.

“The conference will provide a huge boost to the Abu Dhabi International Hunting and Equestrian Exhibition (ADIHEX), which is held under the patronage of Shaikh Hamdan bin Zayed Al Nahyan, Ruler’s Representative in the Western Region and Chairman of the Emirates Falconers’ Club from September 22 to 25. With the IFAHR providing full support and the Abu Dhabi Sports Council (ADSC) co-ordinating the conference, the event will be another platform to acquaint visitors with the deep-rooted traditions of Abu Dhabi and the UAE,” Abdullah Al Qubaisi said. Sami Jassim Al Boenain, Chairman of IFAHR, WJ de Ruiter, Treasurer of IFAHR, Lara Sawaya, Director of the Shaikh Mansour bin Zayed Al Nahyan Global Flat Racing Festival and representatives of the sponsors, were present during the announcement.

Racing conference will be a huge boost: IFAHR chairman

“The World Arabian Horse Racing Conference is a cultural and educational conference. It will be a huge boost for IFAHR. There will be an international presence and that is what we need. We would like to thank the UAE for this conference,” said Sami Jassim Al Boenain. He also said that the conference will help in attracting new members to the fold. “This conference is also important because we at IFAHR, are in need of new members. We are an international federation but we are still a small federation. So, we would get new members,” said Sami Jassim Al Boenain, who is also the general manager of the Qatar Racing and Equestrian Club.