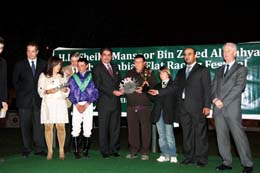 But Guy proved them wrong as the four-year-old demolished his rivals including Nayef Al Khalidiah, Badad and Raked, all Group 1 horses, to get the Mansour Festival off to a great start here on Friday.

Though Badad (5th) and Raked (8th), both owned by Shaikh Mansour Bin Zayed Al Nahyan, Deputy Prime Minister of the UAE and Minister of Presidential Affairs, failed in the feature event, Dahwa won the second Group 2 race on the night as Shaikh Mansour finished with three winners.

Dahwa under Ioritz Mendizabal won the Prix de L’Elevage Group 2 race for fillies while earlier in the night Salaamah started with a win for jockey Mendizabal and owner Shaikh Mansour.

Musharab completed a great night for the yellow and green colours of Shaikh Mansour winning a 7-furlong race under Francois Xavier Bertras.

Earlier in the feature event, jockey Francis Lopez on Scoubidou de Carrere seized the gap once on the home stretch in the 10-furlong race and won by over two lengths from Periander, the Dutch raider who seems to have made it a habit of never winning but being placed for the 8th time in 9 starts. The Faisal Al Aweet-owned filly Al Ryma did well to finish third ahead of the favourite Nayef Al Khalidiah and the pair of Shaikh Mansour-owned horses — Badad and Raked.

“This Group 2 race had the quality of a Group 1 and many thought I was crazy to run Scoubidou de Carrere,” said the elder Dell’ova, who received the award with his grandson Terry, who is the breeder.

“But I had a feeling that if he gets a good run then he will be there in the finish and Lopez did a great job to get out of the traffic,” said Dell’ova after finishing richer by Euros 10,000.

“Scoubidou de Carrere had finished behind Nayef’s stablemate Shart Al Khalidiah here last month and I was confident after that run,” he said.

“Since this race is part of a three-race series I will for sure think of running him again in either Holland or Poland,” said the trainer, whose base about 20km from Toulouse is the breeding centre of the famous de Carrere line of Purebred Arabians.